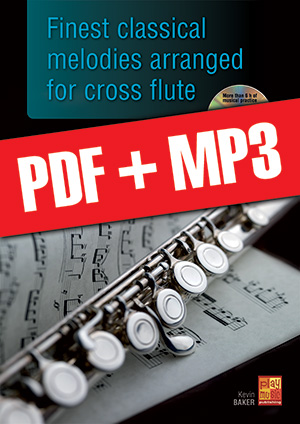 Author: Kevin Baker
Contents: PDF document + MP3 files
Available: Immediately
Shipping: Download
Size : 334.24 Mo
Download the contents   Add to my list
With its extensive and diverse repertoire, this tutorial allows you as a cross flutist to access the best of what classical music has to offer. If you choose to work with this tutorial, you will not only broaden your musical horizon and improve your playing technique, but indeed enjoy performing all kinds of masterpieces on your own cross flute. All the great composers are featured – with one or even several of their works, with concerts, symphonies and sonatas, with lieder, arias and overtures, with Renaissance dances, orchestral pieces, waltzes and ballets, but also with instrumentals such as preludes, nocturnes, etudes, marches, gymnopedies and much more. And in order not to lose your enthusiasm while practicing, each score is accompanied by 2 audio-recordings, which you will find on the mp3 CD attached to the tutorial. In the first recording, the cross flute-part is played along to the corresponding accompaniment. In the second, only the backing track (the accompaniment) can be heard, which gives you the possibility of taking up the score yourself. In total, you are invited to enjoy 174 recordings, which add up to more than 6 hours of musical practice(!)

Since you are dealing here with the downloadable version of the tutorial, the book corresponds to a PDF document and the CD to mp3 audio files.